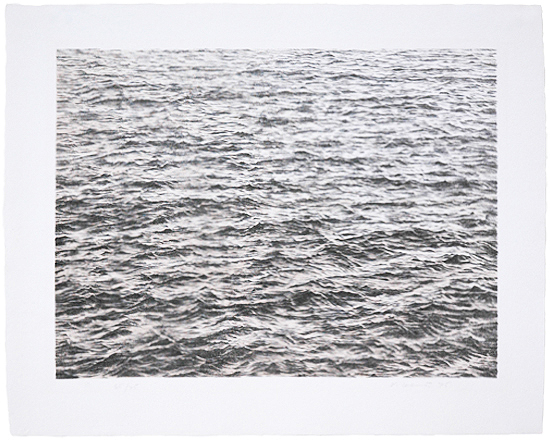 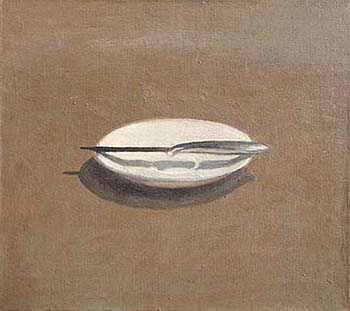 Ocean is one of a set of four that Celmins made from lithograph pencil drawings on stones, including a day sky (Sky), a night sky (Galaxy) and rocky desert earth (Desert).

For the lithograph Ocean she drew on three stones. At base was the master image. On a second stone she tipped in deeper highlights, and on the third stone a diffuse ivory background. Wanting to open the background more, she flailed at it with a pumice stone, whooping gleefully, gravel flying.

Celmins was born in Riga, Latvia. She lived and worked in Venice, California from 1962 until she relocated to New York in 1981.

In her paintings, drawings, and prints Celmins uses a meticulous, even obsessive, technique, representing observed subjects from low, frontal angles, filling the picture plane with allover, lapidary abstractions. She painted Untitled (Knife and Dish) a year after Diebenkorn—who was known in LA—painted Cup, and a year before he drew his lithograph Cup, Saucer, Fork and Knife. Her putty-colored still life acknowledges Morandi, at least.

Whether in graphite, lithography, wood engraving, or etching her imagery wants to ignore the variations of materiality. They all look the same. yet her stature has grown greatly as other artists and collectors discern a profound humanity in her imagery.